A downloadable game for Windows and macOS

Patches is dragged to school for the first ever cat-and-dog school day! With Coco and Brownie distracted with home ec class, Olive and Angel busy with literature, and Sparky and Ginger occupied by gym, Patches has free reign over the school... Almost.

All he needs to do is get this damn collar off and wreck some havoc! Will he prove cats and dogs can get along, or will he make this the Purrfect Apawcalypse?

This game is the finale of a trilogy!!! Play the first one here!

Trigger warnings: cartoon violence, gore and strong language. Play at your own discretion! Art, writing and programming by Denny, with programming help by Andy, and Music by Lyon, created using Renpy!

For those of you who are interested in donating for this free game, please consider donating to this fundraiser instead! Donate $5.00 or more and I'll send you a big zip file full of behind the scenes files like PSD files, sketches and more! <3

can i ask what all the canonical ships are? i know some of em were implied but weren't cleared up! also, this series was really great! thanks for making such a great series. :D

thanks!! :3 canon romantic ships just include brownie x coco (romantic) and heavily implied patches x whisk (romantic) but yeah nothing concrete. i think its nice to keep things a little vague so people can interpret things themselves. UwU

Enjoyed this series a lot more than I thought I would. It's got a really great art style, a strange mix of whimsical and twisted humor, and endearing characters. Sparky is best boy.

ackkk- I’ve been dying to play this! and it’s finally here, i hope you guys keep on creating cool games!!:D, altough I’m still sad I didn’t get to have a character there by donating, but I’m still happy either way!!<3 (good luck!!)

Omg i didn't saw this coming.  A threequel? Let's gooooo

I'm so unbelievably touched by how being kind and giving someone a chance can change someone completely in this game. This was one of the most fun and wholesome trilogies I've ever played. I'm unspeakably sad it's over but overjoyed it ended how it did.
Thank you everyone who made these games :D

Okay, finally I am here! After the first and the second one, now we're at Purrfect Apawcalypse 3! Been fun playing this game.

ehehe, sorry, this got a bit long and rambley, but i just want to mention how much i love Purrfect Apawcalypse, despite only discovering it at like, 1am or something. (also i'd totally be throwing my money at this series if i wasnt broke)

wowowow where do i start with this??? :3
ok, so i first discovered the game really early this mewrning! yeah, this one! it had popped up while i was scrolling for new itch.io games to play! i clicked on the link leading to the first game, and i was a bit iffy about the gore and blood, cause i'm in a bit of a fragile mental state currently, but i played it anyways and wowie did i ever love it!!!! it took me a while to get the "everyone survives" ending, but i succeeded!
then i went onto the second game, purrgatory furever, after taking a shower!! (and giving myself a furcut- i mean haircut!) it took me a lot longer to even get past chapter 2, but i managed. i trusted the meat. by this point, i was absolutely enamored with olive and their little group of furiends, and beclaws i'm nonbinary as well, i really felt like i related with olive's friendly character and their point of view!!!
by the end of the second game, i didnt even pawse before moving onto the third game, here. i really wanted to see efurryone's adventures and interactions- they felt like my furiends, too, and i was so happy to spend more time with them all!! thankfully, i managed to get the purrfect ending on my first playthrough, and now that i'm done, i'm here now writing this review at 10am, having not slept at all! gosh, i don't think i'll ever be able to furget this series and all the loveable characters! it was an amazing ride from start to finish and i'm honestly a bit sad that it had to come to an end. but really, i just want to say thank you to the devs for taking me- or rather, us, all of the players on such a wild ride through this series! it really was purrfect!<3

WOW thank you so much for the kind review and all the puns ;w; <3 this makes me really happy to read, im so happy you enjoyed the games!! <3

furnomenal!! i'm usually not big on redemption arcs but god damn it i am proud of patches. super impressed by the expressiveness of the character sprites and how elaborate the branching paths are. out of the new characters my favorites are tigger and rover... they just want to play sports and i WOULD die for them. cheers!

After playing through this game several times I can say for sure that it is a fun game. The perfect end to a trilogy I've been keeping track of for over a year now. Seeing how the art gets better with every instalment is pretty satisfying.

I'll be keen to see whatever you chose to pull off next after this.

thanks so much cone! ^w^

Heya! I realy like Purrfect Apowcalypse, and im from Russia (and this is why my English is so bad :/) but, maybe i can help my favourite developer with translation? <3

aw thanks so much!! im glad you enjoyed the game! i actually already have someone helping with the russian translation but thank you for the offer ;w; <3

So I played the updated version of the game and got the good ending with all characters at max friencship level (sparkling hearts) but the bunus illustration doesn't show up? It just goes to credits after showing the player Patches' relationship status with the others??

oh shoot, did you also get a big sparkling heart? you can get it by getting the best ending for each of the four classes, which you'll know you got if you find a full screen illustration like this (spoiler alert). also you can see the heart slowly heal at each chapter intro like here. 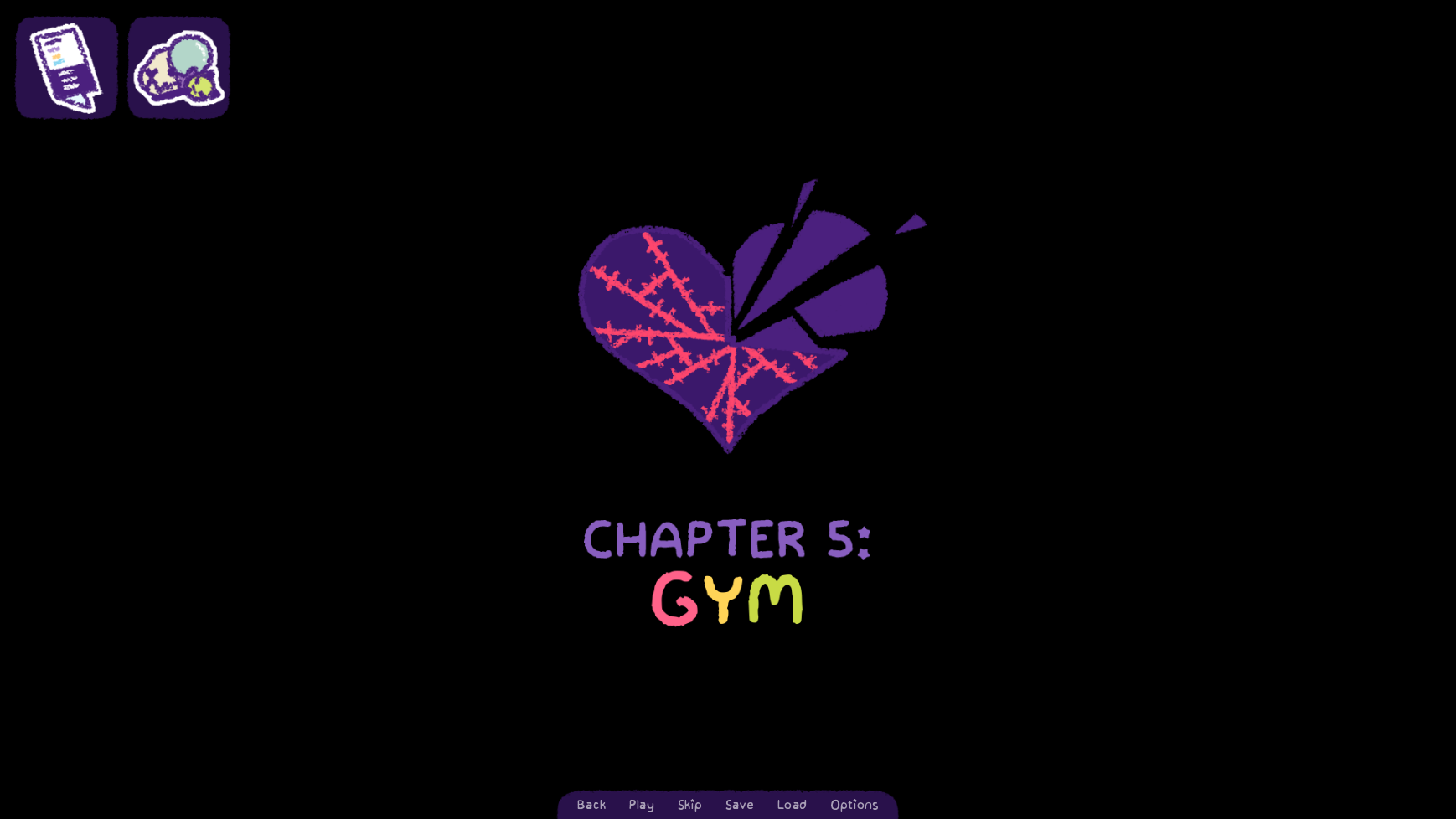 I did! But it still goes to credits...maybe there's a bug preventing the bonus CG from showing up?

same for me too

oh sorry, i dug a little more and i think i found the bug!! i've fixed it in version 1.7. thanks so much for your feedback it really helps! ^w^

Thank you for the update (and for making the game of course). I tried playing through 1.7 from the beginning, got the best ending illustrations and mended hearts for each chapter, chose the "Angel Doesn't Love You" option at the locker, and everyone is max friendship, but I still go straight to credits at the end. Is there another condition I am missing?

Oh my god its finally out time to pLAY IT-

OMG YESSSSSS YAY IMA PlAY THIS AS fast as i van

aaa this was a lovely finale to purrfect apawcalypse!!! each game has been very fun to play, and the characters are so lovable (esp olive, i adore olive with all of my heart they are so sweet) i loved it lots and can't wait to see what you guys do next!!

IT WAS SO SO GOOD I LOVE IT

ahhh i've been waiting for this :)) i loved the ending and how we could make patches change!!

Hello!! Second comment. When I first saw the email that said this game was uploaded, I completely lost my shit(in a good way!!) and ran to my computer the moment I could. So far I got the good and bad ending and I'm so happy! This game was fantastic just like the previous ones and I loved every character, new and old. On my next run, I'm gonna try to find a way to make everybody happy(atm while writing this, it's past midnight and I need to sleep, lmaoo). Just wondering, is there a secret ending, perhaps? :'0

DAW im so glad you like it!! ;w; also there's not really a secret ending but you do get a bit of some extra stuff if you complete the bad ending while having completely broken hearts with everyone, and there's a bonus drawing if you make everyone happy and get the good ending! :3

And my quest has begun. Thank you!! Looking forward to getting the extras. 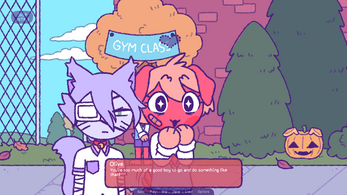 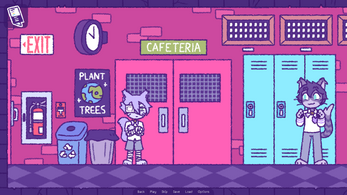 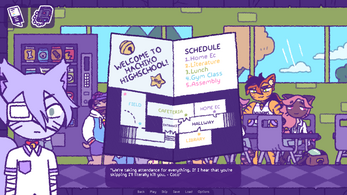 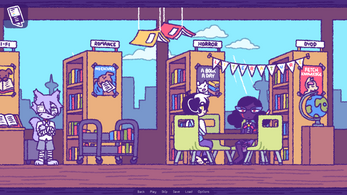 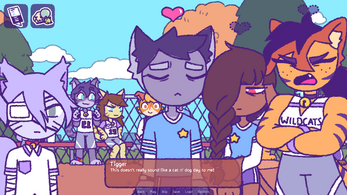